Laneways, parks, footpaths and streets will all be converted into outdoor dining spaces as part of a plan to revitalise Victorian venues and make hospitality Covid-safe. The Victorian government announced a $290 million funding package to help venues return to outdoor dining in time for summer. The money will help businesses setup outdoor areas, convert rooftops and courtyards and fund covid-safe events to encourage diners to return to the CBD.

Premier Daniel Andrews said that Victorians can expect laneways, parks and gardens, footpaths and streets to be converted into outdoor dining spaces, with some venues sharing outdoor areas as well. He expects the new dining format to “change the way the city operates” and become a lasting feature of Victorian summers.

It’s still undecided whether venues will install clear screens between tables for diners, but it’s a possibility.

There’ll also be an $87.5 million outdoor hospitality package for businesses outside the CBD with a payroll under $3 million. This will be paid in grants up to $5000 to cover the costs of umbrellas and other outdoor furniture. The state government is also working on streamlining the process for venues to obtain outdoor dining permits from councils.

A similar dining plan was implemented in cities such as New York and London to help hospitality venues reopen safely. Industry Support and Recovery minister Martin Pakula said a focus on outdoor dining would “create a new alfresco environment for CBD dining which will, I suspect, be enjoyed for many summers,” and “utterly transform the city.”

While Melburnians are excited at the prospect of returning to venues any way they can, business owners are sceptical of the outdoor dining plan. Chris Lucas, who founded Chin Chin, Kong, Baby, Hawker Hall and Kisumé, says that al fresco dining isn’t a fix because “the majority of restaurants aren’t set up for it” and that security and logistic issues mean that a shift to outdoor service “throws up more problems than it solves.”

As it stands, Victorian venues can reopen to diners from October 26, as long as the 14-day average for case numbers is less than five per day. 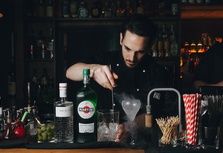