How'd You Get Your Job: Sophie Endrey, International Sales Manager at Ellery

Here's how she helped put the Australian brand on the map. 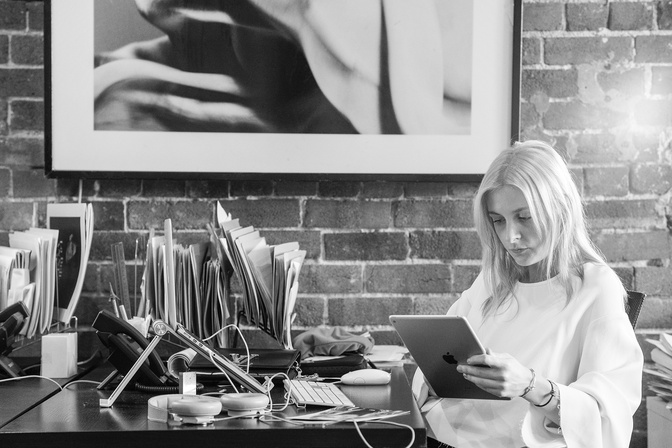 It’s not easy for Australian designers to get noticed overseas. The geographical distance, another time zone and the competitive global market make it tough. Yet Kym Ellery, of the eponymous Ellery label, has not only been noticed, she’s broken through, making it on a global stage.

Ellery’s international sales manager, Sophie Endrey, has played an instrumental role in the company’s evolution and growth. Between 2009 and 2012, Ellery was 100 per cent a domestic market. Today, 93 per cent of the business is outside of Australia, with 150 stores stocking Ellery across the US, UK, Europe, Middle East, Asia and Australia.

Making four trips a year to New York and Paris (and occasionally visiting London and Milan), it might seem as though Endrey’s won the lottery. But, “It means long hours, constant jet lag and things that wouldn’t traditionally be in your job description,” she says.

Originally from Melbourne, Endrey studied performing arts before moving to London at 21. She spent a year interning at both Chanel and Sienna Miller’s former label, Twenty8Twelve, then returned to Australia. “When I got back, I missed the cut-off date for enrolling in law at uni. My mum was really mad at me. It was bad but good news, because I decided I didn’t want to go back to law, and explored doing a fashion course at RMIT instead,” she says. She missed the enrolment cut-off for that course, too. It proved to be another of the best mistakes of her life.

“They recommended I do an internship to get back in. That was when I found out about Ellery in Sydney. After seeing a 10cm-by-8cm advert for the brand in Russh, at the bottom of the page, I sent her [Kym Ellery] an email. I found the look of the brand so compelling that I reached out.”

According to Endrey, nailing that email was key. “I kept it short and factual, putting all the key information at the top.”

Her job is hard to define, but it is customer-service focused. “I have been lucky to carve out my own career path, because there isn’t anyone who has done my job before. I understand what Ellery wants, and what the market wants, and I try to draw a line between that.”

Every day is different. While she’s based in Sydney at the office in Chippendale, her desk is often empty. “I’m constantly travelling, setting up showrooms, meeting with buyers from all over the world, communicating over the phone to Europe at 5pm when it’s 9am in Sydney.”

Flexible thinking is also important. “You can’t be too rigid in your approach. I’ve learnt, being in a brand that has gone from a start-up to rapid growth, you have to move with the different stages of the business. It’s gone from having two people to 30 people, and you just have to keep up.”

When looking to infiltrate global markets, where did she start? In the nerve centre of the global fashion industry – Paris. “Since I first met Kym, she knew she was going to do Paris Fashion Week. She’s one of those people who has such a huge vision, and you just believe her.”

Endrey helped Ellery become the third Australian label (along with Collette Dinnigan and Martin Grant) in a century to be granted official recognition by the body that controls Paris Fashion Week. This is a huge achievement for the brand and for Australian fashion. Advice
How To Prepare Your New Restaurant for Service: First Steps