We catch up with the Criteria Coffee crew to find out how they run a successful roastery and hear how their new recruits have settled in. 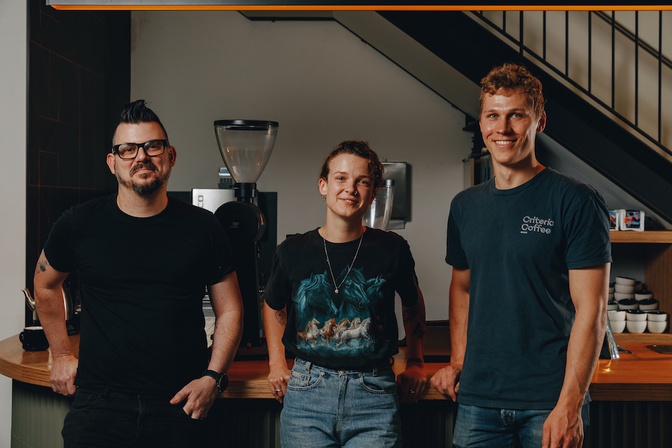 You may have heard of Criteria Coffee already, it’s Melbourne’s newest coffee co-roasting space, where you can come in and facilitate your own production, learn the ins and outs of roasting and produce your own blend.

It’s run by Craig Simon, who has had nearly 20 years’ experience in the coffee industry working every link in the chain, judging at the World Barista Championships and being crowned Australia’s champion barista three times. He’s also Australia’s first Q-Arabica instructor.

Q-instructors are to coffee what master sommeliers are to wine. There are only around 50 worldwide, and you have to study for years and pass a series of 22 tests to achieve the qualification – so when Simon was expanding the Criteria Coffee roastery team, he knew he had to hire the right people.

Those people were Frederick (Freddie) Kjaerulff-Schmidt and Erin Doidge, who both joined the team as roastery assistants through Scout. We caught up with the team at Criteria Coffee to see how the pair has settled in.

Scout: Which positions did you hire Freddie and Erin for?

Simon: Both Freddie and Erin came on board fundamentally as baristas, but with such a small team, everyone kind of becomes everything. Everyone is in the roastery doing whatever’s required. I’m always really keen to have people come in who don’t necessarily have the skills but have the right attitude. So you’re working on developing their skills in the coffee industry – what’s the long-term plan for these two?

Effectively, my aim is to make myself redundant in the roastery and just deal more with the business side of things. Ideally Freddie and Erin pick up the skills I have and can run the roasting operation. I just want to give them all the resources and knowledge to excel here or eventually move on and do their own thing.

That’s a lot of responsibility.

I don’t believe in micromanaging people. I try to let them take responsibility and let their skills flourish that way, as opposed to incentivising them to work harder and harder for the business. The best ones always end up moving on, and if we only have a short period of time together then we’ve given them opportunities and responsibilities that they might not get elsewhere. I found on other platforms that I’d just get an immense number of applicants without relevant skills or people who hadn’t even read the job description. Even if you can recognise that stuff straight away, it still takes time to go through all those applications. Scout seems like it has a good content-to-spam ratio, I guess you could call it! We got a lot of applicants for our last position, and too many of them were suitable.

How did Freddie and Erin stand out amongst the candidates?

Freddie had the most incredibly positive attitude. He’s so interested in the process, his energy is fantastic, he walked in the room and we felt relaxed talking to him. Because it’s such an intimate setting and there’s no real hierarchy, that’s really important to us. It was the same with Erin, she had the right attitude and skill set and had shown interest in the company in the past so that definitely helped. The final interview was less about the skills and more about the talent and finding the people you gel with on a personal level.

That’s great. Besides personality fit, was there a lot of competition for these roles on a professional level?

I got lots of really high quality candidates; it was the opposite problem to what you normally have where you can’t find the right person. We couldn’t even interview all the suitable candidates because we just didn’t have time. I feel like the biggest advantage is having reach to so many people, which is what made the process super easy.