Master and Apprentice: Two Barbers on How They Changed Careers

Careers don’t just happen overnight – they require constant nurturing, support and training. Scout chats with Kings Domain co-owner and hair stylist Aaron Chan and his apprentice Kane Weber about their respective careers and what’s helped them develop in their profession. Kings Domain Barber Shop owner Aaron Chan and his apprentice Kane Weber decided to change careers in much the same way: reclined in a chair, talking to their hairdressers.

“I remember the moment like it was yesterday,” says Chan, who had his career-changing conversation with award-winning Melbourne hair stylist Joey Scandizzo in his South Yarra salon 13 years ago.

“I was sitting there complaining about the hours I was doing as a chef and Joey just came out and said, ‘Why don’t you just come and work for me?’”

Coincidentally, the same words were heard more than a decade later across the road at Kings Domain – this time coming from Chan to Weber, who was also complaining about his work behind the pans.

“It’s pretty amazing really,” says Chan, on the sycnronicity. “[His comments] triggered my memory, and out of the blue I offered him an opportunity to work with me.

While Chan quickly jumped on the chance for a career change, Smith was hesitant.

“I wasn’t convinced,” he says. “But [Chan] chipped away at me for a few months to come and work here until I couldn’t say no anymore … I’m pretty thankful that he did.”

Chan says he was persistent because he knew the golden opprtunity on offer – the hair styling industry has provided him with a very rewarding career. Looking back though, he certainly faced some challenges adjusting.

“That first training blow wave I did on a friend was pretty embarrassing,” he says. “It took so long that she got a parking ticket – though at time she didn’t have the heart to tell me. ”

Under Scandizzo’s mentorship though, and through regular training sessions at the nationally renowned Joey Scandizzo Training Academy, Chan quickly sharpened up his skills.

“I learnt to cut from watching the way Joey cuts. I’ve cut many of his clients’ hair over the years and they’ve said it’s a bit freaky, because my cutting style and mannerisms are almost exactly like his,” Chan says.

Given his lifelong ambition to be his “own boss”, working at Joey Scandizzo’s salon paid off. After eight years working together, having developed a strong mutual appreciation, Chan and Scandizzo decided to go into business together.

In 2013, they opened Kings Domain Barber Shop on Toorak Road – a business that has since grown to six locations across Melbourne and Sydney.

“Honestly, I was ready for a change of scenery. I wanted an environment more suited to me, with the music and the look of the shop that I wanted,” Chan says. “And I wanted to focus on cutting men’s hair, which had become most of my clientele.” At Kings Domain, Chan has always focused on creating an environment that is as nurturing and supportive as Scandizzo’s salon was. He even set up the Kings Domain Academy, where his apprentices spend one day a week. It’s here Smith is mastering the craft, just like Chan did ten years ago right next door.

Smith’s career in the industry started off a little differently. He worked as a receptionist at Kings Domain for three months before starting as an apprentice.

Early on he wasn’t overly keen on it as a career, but learned to admire the art and is now in it for the long haul.

“When I started it took some time to appreciate everyone else’s technique, rather than just watching mindlessly,” says Weber. “But now I can sit for ten hours a day and watch the barbers cut.”

For Weber, having the balance between ‘learning on the job’ and sessions at the academy works well.

“I learn better when I’m actually doing it rather than learning about it in a classroom the whole time,” he says.

Chan is adamant about the need “to be happy at work”. It’s what kept him going through the eight years at Scandizzo’s salon, and it’s a key priority of his when managing staff.

“When we opened I knew that would be challenging, but I didn’t realise that the staff management and people side of the business would be the hardest and most rewarding part,” he says.

“We get the staff from all of the shops here together once a month. The one thing we want is for everyone to feel welcome.”

The sentiment has clearly rubbed off.

“I feel more comfortable every day being here, ” says Weber. “Coming to work and actually looking forward to seeing the people you work with is a natural bonus.” Aaron Chan is currently looking for apprentices and senior stylists to join his team across Melbourne and Sydney. Check out the listings and the video below:

This article is sponsored by Kings Domain Barber Shop 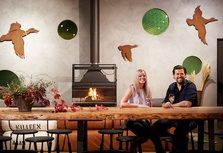