MOVI: A Designer Stand-up Desk to Improve Your Health I once knew a guy named Stefan who strained his back adjusting a desk at work. The ironic thing was, it was a stand-up desk meant to help people with bad backs. He ended up throwing it away, much to the amusement of a mutual colleague, who told me at the time that it was “probably a good thing, he looked stupid standing there next to that ugly machine anyway”.

What Stefan could have used is a MOVI Stand-Up Desk, a design from Melbourne couple Daniel and Nadia Angelini.

MOVI is not only more attractive than most in the stand-up desk market, but is adjusted with the help of an electric motor, so there’s no risk of physical harm.

“You can sit and stand at the touch of a button”, explains Nadia. “It’s been designed to make it as easy as possible to adjust the height so you won’t strain your back.” The idea for MOVI came several years ago when Daniel injured himself exercising at night, after sitting at his desk and barely moving all day.

“I decided I needed a stand-up desk to get me moving more, but there really wasn’t anything on the market that I liked,” explains Daniel. “So I ended up making a DIY one with some IKEA bits and pieces.

“This inspired my work[place] to buy some stand-up desks of their own … the thing was though, no one really used them. They were uncomfortable and really didn’t look any good.”

Daniel and Nadia decided to create a stand-up desk that was functional, safe and stylish.

“Getting the look and feel of it was really important so we started working with some really talented local furniture designers to evolve the concept”, says Nadia.

“We had this vision of bringing the outside indoors to create an uplifting workspace, so we felt a natural bench top was the best way to achieve that. In the end we decided on bamboo because of its look, feel and sustainability.” MOVI is also not just for those with back issues, but anyone who is looking to improve their all-round health. Nadia and Daniel consulted a number of health professionals during the design process, who all pointed out the dangers of sitting down for long periods of time.

“Our bodies are designed for movement, so sitting down for eight hours in a day isn’t natural for us at all, ” says Daniel. “Spending 11-plus hours a day sitting down increases our risk of disease by over 140 per cent.”

Daniel became so passionate on the subject that he also published a book called The Sitting Epidemic – a beautifully designed 150-page hardback with tips on creating an active workday, tackling lower back pain and how to use a stand-up desk properly. Check it out here. Although MOVI is yet to hit the retail market, Daniel and Nadia currently have a live Kickstarter campaign where you can pre-order the desk.

More details and other product benefits are available on their website. 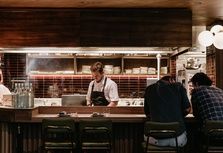 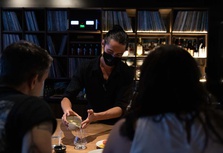