Jennifer Abela is a Melbourne coffee veteran. She’s been in specialty roasting for more than 11 years, looks after all the Proud Mary venues and heads the training department at Collingwood Coffee College. It’s no wonder she runs on coffee.

There are few people better placed to discuss Melbourne’s evolving coffee scene and chat about the difference between a cappuccino’s and a latte’s froth (we’ll get to that). Our conversation quickly turned into an exploration of cafe culture, consumer-driven coffee trends and new roastery projects.

One of the most interesting things about coffee in Melbourne is the variation you get across the city. While the standard of coffee is generally pretty good, the same order will taste noticeably different from venue to venue. At the risk of sounding like every Melburnian overseas, this is what sets the city apart from places such as the US, where the coffee is more consistent across the country – though a specialty coffee subculture certainly exists.

“I think variation is great. It’s what keeps us competitive and what keeps the market interesting,” says Abela. “Cafes have made their cup sizes a lot smaller than they used to be, which has really thrown out the ratio of milk to coffee. Every cafe – their ingredients, their cup sizes, their ratios, all of those things make up their unique recipe.”

Part of the reason so much is offered here is Australia’s love for milk. The latest Square Australian Coffee Report shows that nearly 90 per cent of our coffee orders contain milk. This is a trend Abela is well aware of.

“Australia has an obsession with milk. When we can’t have it, we just find an alternative,” she says. “With the emergence of alternative milks, there have been heaps of new challenges for baristas with latte art, keeping consistency and still serving a delicious beverage. That’s something baristas are really staying on top of the trends with.”

Alternative milk trends contribute to a progressive Australian coffee culture, and help ensure baristas and roasters are working to a high standard.

“There’s a really good amount of competition in that market at the moment, so you know you’re getting the best of the best,” says Abela. “We’re starting to see people challenging the status quo and trying some new and exciting things.” Are constant changes driven by cafes or consumers? Abela believes both play a part in the process, although consumers have the final say on what’s working.

“Cafes can suggest things, but it’s hard for us to predict changes. A lot of the time as a roaster, we’re really on the cusp of what our cafes are doing and what their interests are,” she says. “We feel a bit of responsibility to represent products that are going to give our customers the best outcome, so the trends themselves are actually driven by the consumer.”

While there’s a seemingly endless amount of new and exciting coffee styles on offer, it’s hard to go past a good latte or cappuccino. Even those with a passing interest in coffee will know that a cappuccino is considerably frothier than a latte, but are the two moving closer together? Proud Mary is mindful of the trend and takes pride in brewing its coffee orders to perfection. But it has seen evidence of it across Melbourne.

“It’s something the industry has been aware of for a while, but it’s not something anyone is really talking about,” she says. “We know cappuccinos are typically frothier than lattes, but I think the line has been blurred, especially now that we have more alternative milks.”

Abela says high demand for milk beverages means baristas have to make multiple orders at once, leading to less variation between them.

“We’re getting such a great load on coffee machines that the milk element is taking the hardest hits,” she says. “There are also boundaries on how far you can actually stretch milk. Baristas are obsessed with finding a quality of foam – something that has the right texture and consistency – more than quantity alone.

In a busy service, for two flat whites a barista will grow the foam in the milk by 25 per cent. For two lattes 30 per cent, and for two cappuccinos 35 per cent.

With the complexity of coffee growing more convoluted and a new cafe opening in Melbourne what seems like every week, you’d think we’d be close to reaching a tipping point and stripping coffee back to its bare bones. While this is happening in some venues, Abela believes there’s space for both simple and complex coffee experiences to coexist.

“There’s always going to be room for both. One thing that we look at with coffee is that we’re not only selling a cup, we’re selling an experience. The biggest barrier to us selling that is education,” she says. “People need to understand essentially what good coffee is and what makes it so special. That’s one of the challenges a barista faces every day.”

It’s hard to say exactly where coffee trends might head next, but Abela has an idea of where she’d like them to go.

“I find that cafes just doing milk and black really interesting. They’ve moved past that idea of having different milk beverages and just nailed it down to milk coffee and black coffee,” says Abela. “That’s a really cool concept because it takes the confusion out of drinks. I’m excited to see more of that and make that more of a norm.”

Without giving too much away, Proud Mary’s next move is to shift its focus to the stories behind their blends.

“We’ve been working on some exciting projects with our farmers, and that’s something we’re pushing towards more than anything – making sure we’re spreading more awareness of those stories,” says Abela. “That’s something we’re going to see a lot more transparency around in the next couple of years.” 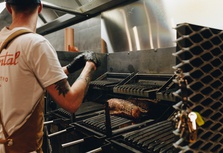 Feature
From Running Food to Running Venues: Julie Davaine on What It Takes to Succeed in the Hospitality Industry