From Running Food to Running Venues: Julie Davaine on What It Takes to Succeed in the Hospitality Industry

Davaine unpacks her journey from a brasserie in Paris to managing The Paddington Precinct with the Merivale Group. When we speak to Julie Davaine her phone is buzzing with congratulatory texts after winning the 2019 Hostplus Hospitality Scholarship.

“On the night I was really overwhelmed, I couldn’t believe it,” says Davaine. “Today it’s just sinking in and I feel so humbled. I’m sitting here asking myself if this is real.”

The scholarship is awarded to young hospitality professionals who are taking exceptional steps in their careers. Each year, the winner gets the opportunity to work at three internationally acclaimed hospitality businesses overseas, a mentorship program with an Australian industry leader upon their return and an appearance at the following year’s Melbourne Food and Wine Festival.

Davaine took home the award for her work managing the Merivale Group’s Paddington Precinct – a role that’s been 10 years in the making. After starting her career in a Parisian brasserie, the French national moved to Sydney to step outside her comfort zone.

“I was 24 years old and couldn’t speak English – it wasn’t good enough. I figured I could go to London or move further away, discover a new culture and really push myself, so I decided to come to Australia,” says Davaine. “I completely fell in love with Sydney and the way people were working, going out and dining.”

Davaine joined the Merivale Group as a food runner in a sushi restaurant 10 years ago, barely able to speak English. Now, she manages four venues (Fred’s, Charlie Parker’s, The Paddington and The Chicken Shop) and more than 150 employees. What does it take to get here?

“There’s some very simple advice that sticks in my mind. You only need to be a hard worker, be loyal and push yourself and you’ll achieve whatever you want,” says Davaine. “It’s something I constantly try to follow because it pays off.”

Davaine’s hard work initially helped her take the reins at Sydney French brasserie Felix. An eager disposition and willingness to speak openly with management then saw her shift into a role at Ash St Cellar.

“After another three years I was ready for the next challenge, that’s when they gave me the opportunity to be a part of the Coogee Pavilion opening and I eventually became the food and beverage manager there,” says Davaine. “Following that, I felt ready for a new challenge, made that clear to management, and that’s how I came across the Paddington Precinct role.”

“You need to improve not only your skills but on yourself as a person and how you approach things like responsibilities and communication,” says Davaine. “It all depends on how you influence those around you, create a vision for others and work in collaboration with people.”

While a career in hospitality can be extremely rewarding, the industry is difficult to navigate, particularly for those early in their careers. Davaine shares some tips for those starting out and useful reminders for industry veterans.

“You need to love people and be approachable. There is a value in caring for what you do, the people around you, the guests and the experience,” says Davaine. “If you fail or encounter difficulty, you need to learn not to let it go, but to keep pushing through it – that’s where the potential for improvement is.”

Aside from this, Davaine says it’s important to look after the mental wellbeing of yourself and your colleagues.

“You never want to feel isolated – share your feelings and don’t hold things in,” says Davaine. “If you show vulnerability people will do the same, then you’ll create a connection and a more efficient dynamic within the team.”

Davaine is enjoying her career in Australia and has no plans to move back to France any time soon, preferring to see where the scholarship and the next 10 years might take her.

“The mentorship that this scholarship offers is pretty special, so I’ll take it with an open mind and apply changes for the future,” says Davaine. “Apart from that, I definitely see myself in Sydney. The reason I fell in love with this country is because there are so many opportunities – it’s like the new American dream: whatever you want to do, you can do.”

Davaine also wants to change attitudes towards following a career in hospitality.

“I would love to be able to influence more people, create a love for hospitality with the next generation and for them to realise it’s a long-term career,” says Davaine. “This industry can be something that brings so much to your life and there is a fantastic opportunity that comes with hospitality.” 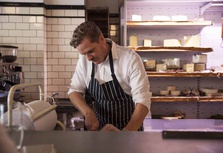 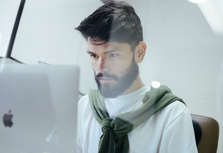