For more than two decades, Stefano’s has been a byword for the best in authentic Italian cuisine. In partnership with Hostplus, we find out what the chef wishes he’d known when he was starting out. “The thing with Italian cooking is it’s not a precise thing,” says Stefano de Pieri in his 1990s ABC series, Gondola on the Murray. “It has to come from the heart, so you’ve got to put something of yourself into it.”

De Pieri is behind Italian institution, Stefano’s in Mildura, and is something of a human encyclopedia on the cuisine. Over 25 years the Italian-born restaurateur has built Stefano’s to the point where it has earned two Chef’s Hats and local acclaim among food and wine aficionados.

But like his philosophy on the food itself, the chef’s 40-year culinary career has not been measured by precision.

“I made a lot of mistakes,” de Pieri says. “But I think they were necessary.”

Only go into business with like-minded people

De Pieri says the importance of a cohesive partnership was not obvious to him early in his career. Now, he now feels they are fundamental to running a business.

“I had two attempts at restaurants before Stefano’s,” he says, “But I was a naïve young man. The first attempt was in the ’70s, when I had a partner who didn’t want to stay in the business. The second attempt was in the ’80s, but that also failed. We didn’t know how to operate as a group.”

When choosing a business partner, de Pieri says it’s best to be brutal.

“Choose the people you want to be with, and make sure they share your dream. If they’re not like-minded, you really have to learn to say: ‘Sorry, no offence, but you’re not my type’.”

TV can distract you from your passion

Most good work leads to more work. For de Pieri it was the initial success of his restaurant that led to his television series and accompanying book, A Gondola on the Murray. De Pieri was soon an Australian household name, but not without personal concessions.

“While financially TV work makes you viable, it means you spend a lot more time in front of a camera rather than doing what you’re actually passionate about,” de Pieri says. “I had no idea what impact television fame would have on my business. I just improvised all the time – and improvisation plus distraction equals distress.”

When shifting from behind the scenes in the kitchen to up front on camera, de Pieri encourages chefs not to be tempted by: “the fame, the cocktails and the cocaine”.

Slack business administration will put you in a hole

It’s hard to understand the cost of running a business until you’ve done it yourself. But restaurateurs, and business owners in general, should always be ready for hidden costs. For de Pieri, setting aside money for GST was a snag: “It’s a trap I’ve fallen into and had to struggle my way out of,” he says.

“The first question for those who want to succeed in the restaurant world should be: ‘What is it going to cost me in insurance, electricity, council rates and workers compensation?’” says de Pieri. “Not to mention rent. A restaurant is either run on your own premises – which means you pay a bank for the mortgage – or in a rented building. There is no way around it. Think about which one you want.”

De Pieri sees being an administrator as one of the many necessary non-kitchen related parts of the job.

“You have to be a psychologist, an adviser, a lawyer, an economist and a passionate person all in one.” 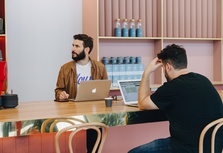 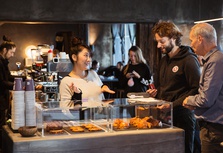