Why I Love My Job: The Team at Melbourne Restaurant Farmer’s Daughters

We catch up with the Farmer’s Daughters crew to hear what keeps them coming to work – and highlight how you can get involved at the Victorian produce-focused venue for your next career move. 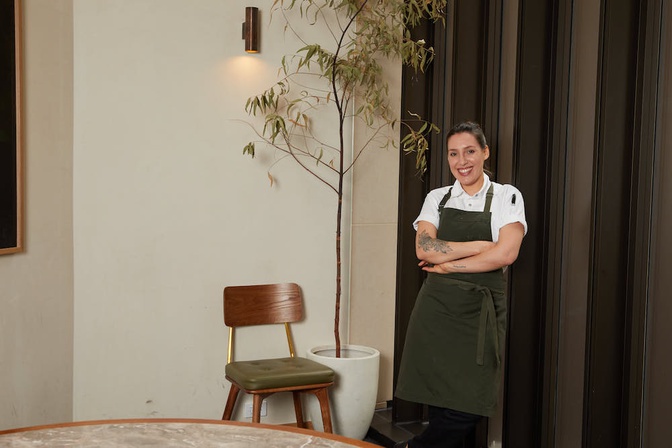 Farmer's Daughters is a three-storey love letter to Gippsland and its produce. Executive chef Alejandro Saravia first became taken with the region back in 2016 when he went on a produce tour and was amazed by the quality and diversity of the region's fare. In 2021, he opened Farmer's Daughters – bringing a bit of Gippsland to the CBD. Comprising a deli, restaurant and rooftop bar spread across three levels, Farmer’s Daughters offers Melburnians the best of Gippsland through casual meals, seasonal menus and ambitious drinks.

A little more than a year after opening (and navigating some uncertainty) we dropped in to find out what it’s like in-venue, day-to-day. We also hear about the workplace culture, learn about working directly with the best regional Victoria has to offer – and to find out why getting on board could be the best career move you ever make. Jack Haw has been working in hospitality for more than six years and at Farmer’s Daughters for slightly more than one. He said his initial interest in the venue was sparked by his upbringing.

“I grew up in country Victoria, so I love that Farmer’s Daughters sources ingredients from Gippsland – I felt a real connection to that concept before I had started working here,” he says. “I was brought up in areas where you shop local and support your local pub or restaurant, so the idea that I can do that in the city is cool and pretty rare.”

Haw says the local produce supply stretches across the drinks menu, as well as the food – an aspect that keeps things engaging behind the bar.

“We cycle-in new drinks every couple of months in line with the seasonal produce. It’s cool to experiment and change things up with our drinks as the seasons and products change,” he says. “All the spirits we have here are Australian, except for our tequila. Being able to work those Australian products into new, interesting drinks, as well as the classics is super engaging and rewarding.”

And aside from his interest in local produce, Haw says the team dynamic is the best he’s experienced in his hospitality career to date.

“We have talented, experienced people, and we seem to do a great job of hiring people who have an appetite to learn and keep growing. The team has the right mindset and a great attitude, which makes the job super easy,” he says. “If I ever have any questions about the kitchen, the chefs are always accommodating and give me a lot of advice. It’s great socially as well, especially being in the city. Often we’ll knock-off and head to a bar afterwards as a team.” Raina Kadar previously worked as a flight attendant, but her passion for cooking drew her to hospitality. After getting on board at Farmer’s Daughters a year ago, her ability to learn quickly and boundless potential means she helps lead the kitchen crew in the restaurant. She says her work is as challenging as it is rewarding.

“We call it organised chaos – it can get very noisy, but it’s a lot of fun and I received plenty of training to help get me up to speed with how a kitchen runs,” she says. “The great part now is that I get to train other people – I’m passionate about seeing people develop their skills and enjoying their results.”

“Thankfully, it’s a beautiful space in here too, which is very calming during those times in the kitchen when things are getting busy.”

Kadar says that being able to work directly with local farmers to source produce and understand the stories behind ingredients is why she loves coming to work.

I get to meet so many interesting farmers and learn about their produce and techniques, which is really cool – they always have great stories,” she says. “I didn’t really expect the farmers to be so involved when I started, but they know which dishes their produce is going into and there’s always a back and forth about what ingredients are coming next.”

Similarly to Haw, Kadar says the people at Farmer’s Daughters are the main reason she loves the role.

“We hang out together and it’s so much fun in the kitchen during service. Everyone feels part of the team and we’re like a family,” she says. “’I’ve got a really special opportunity here and I don’t feel like I’ll get that anywhere else. I love coming to work every day and the reason I changed careers was to find that feeling, so I’m grateful for that.” Callum Strong has studied chemistry and winemaking, worked as a sommelier in venues across Australia and tried his hand at making wine. He says that while he’s passionate about wine, his interest lies more in the service and explanation of it than the craft of making it. He was looking for a workplace where he could express and explore that interest, and Farmer’s Daughters has proved the perfect platform.

“After making wine, and I found that my passion was more in the service and consumption of the wine rather than the production,” he says. “I like entertainment, I like being hospitable and I like educating people on wine, beverages and food – and this is a workplace that gives me plenty of scope to do just that.”

Strong also says being involved in selecting wines and building his skill set in the process are great aspects of his role.

“We’ll adjust our offering based on wine pairings with the food, which is really enjoyable to figure out based on the rotating mix of Victorian produce we’re bringing through the venue,” he says. “There’s constant training across each aspect of the business and all three levels, so there are a lot of versatile staff here, everyone’s skill set is quite multi-faceted.”

Strong says the ethos around the guest experience at Farmer’s Daughters is second to none, and that being able to provide that to customers is reflective of his work ethic and passion for hospitality.

“The way I approach my service is that the people who walk through the door are not customers, they’re guests. This is my dining room and they are eating at my dining table,” he says. “I’m entertaining them, hosting them and being hospitable to the atmosphere of the evening and their entertainment and enjoyment, and this is a workplace that lets me express that.” Originally from Japan, Akaya Ito has worked in hospitality in her home country, Brisbane, Darwin and more. She’s always been a people-person and naturally gravitated towards hospitality from a young age, but says the progression opportunities at Farmer’s Daughters are what makes it a stand-out workplace in her career.

“I started here in a front-of-house role but I had worked as a supervisor before. After a few months, I was supervising the deli and now I’m in training to manage the front-of-house team properly,” she says. “It’s progressed really quickly, but I feel prepared, and it’s super exciting – my manager is teaching me cash stuff, rostering and more.”

Despite the extra responsibility and training, Ito says she still has plenty of time to pursue passions outside of work, and there’s mutual respect between managers and the team as a result.

“Our hours are sociable, they’re not crazy. I’ve had jobs where I’ve worked way too much, but here there’s a great work-life balance,” she says. “All the managers here look after us and they’re very approachable. If we have a problem we can chat to management like friends, which can be rare in hospitality.”

Echoing the sentiment from other employees, Ito says the connection to Victorian produce has been of particular interest for her, learning about the region as someone who has come from overseas.

“We’re super proud of what we’re serving to people and we know the stories behind it which is awesome. We’re introducing Melbourne to Gippsland here and I’ve learned a lot about the region,” she says. “Coming from another country, it’s been great for me because I’ve learned so much about Victoria while I’ve been working here and I continue to learn new things every day.”

If these career pathways sound like some you’d be interested in, you’re in luck. Farmer’s Daughters is hiring across several different positions. You can check out job opportunities here.

This article is produced by Scout Jobs in partnership with Farmer’s Daughters.